Stripe put my startup out of business before I launched

UPDATE: I launched a new startup Elastic Byte in January that helps companies plan, build, and manage cloud infrastructure and DevOps. Contact us if that sounds interesting.

For the last four months I’ve been traveling the world as a digital nomad (Stockholm, Romania, Prague, Berlin, Brussels, Dublin) and working full-time on my 3rd startup, Charge Control. The entire premise was to piggyback on Stripe and allow Stripe users to specifically create rules to prevent and reduce fraud and chargebacks. Yesterday my high hopes and dreams were shattered when Stripe released Radar.

First, let me congratulate Stripe. They have a track record of building amazing product and Radar is no exception. Radar not only allows users to create specific rules based on a plethora of inputs, they also have machine learning that automatically blocks high risk transactions. 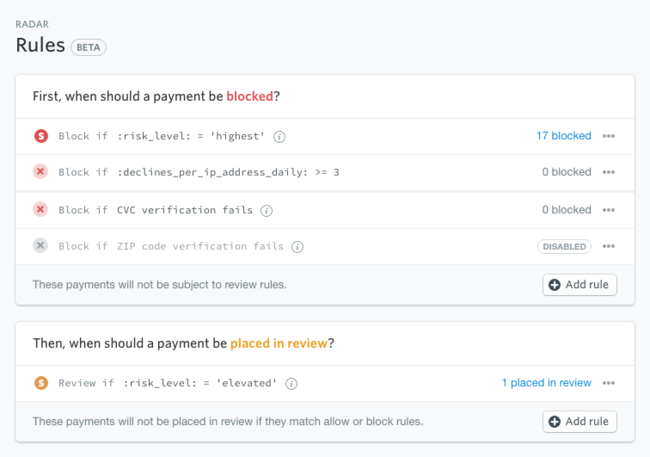 At this point after reviewing Radar, it does not make sense to continue working on Charge Control. Stripe’s offering is superior and included free in their platform. There may be a market for integrating with Braintree instead, but how long until they release their own integrated and fully featured fraud offering? Doesn’t make sense.

I figured since I now have nothing to work on, still brewing new startup ideas in my head, and wandering around San Francisco, I would share what I had completed for Charge Control.

The landing page (very rough, was only a mockup) #

charge-control.js was the front-end JavaScript that users add into their existing checkout page. It essentially just monkey patches Stripe.card.createToken() to call our api first and return either accept or reject based on user defined rules. charge-control.js was vanilla JavaScript supported in most browsers (tested back to IE9) and built with webpack.

Backend: Node.js 6 using Restify. Database was RethinkDB (painful when they announced they were shutting down) with the great RethinkDB ORM Thinky.

UI/Web interface: Had not started development, but was going to go with React and probably Bootstrap or Milligram.

Pricing was to be charged per successful request (accept) and similar to Sift Science in terms of a handful of cents per request. Reject requests were to be free.

I have absolutely no idea. If there is interest, I suppose I can open source both charge-control.js and the api backend on GitHub. No new problems or startup ideas have caught my interest. For now, I will take a bit of time and evaluate what I want to do next. Maybe some more traveling.

Tesla model S and the three laws of robotics

On Wednesday there was a claim of a nearly brand new Tesla model S catching on fire. See the video posted on YouTube: http://www.youtube.com/watch?v=q0kjI08n4fg Speculation was rampant that the highly touted and supposedly insanely safe... Continue →